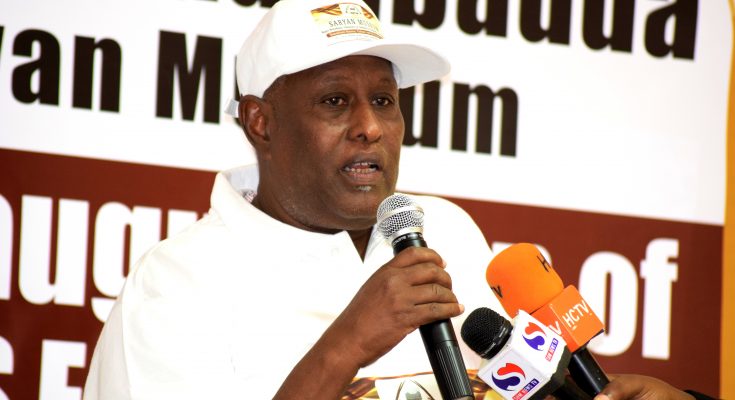 All Somalilanders who obtained their voting cards will proceed to the ballot boxes on November 13th .2017 to elect the fifth president for the Republic of Somaliland. According to National Election commission there are 704.89 eligible voters out of the 830.000 registered people i.e 89% received their voting cards .it is wonderful turn out despite all the natural hurdles , drought and displacement occurred . In other words, that is a clear message to those who doubted about the commitment of the Somaliland people’s adherence to the principles of democracy. The voters are expected to cast their votes on that day and choose the candidate that represents their vision among the three competing candidates namely , Fisal Ali Hussein from UCID party , Muse Behi Abdi from Kulmiye party and Abdirahman Abdullahi CIRO from Wadani party. All of them are seasoned politicians widely respected by the Somaliland community.

According to NEC the ballot boxes stations are already identified and will be placed all over Somaliland districts, sub – districts and villages and wherever voters registration took place. The election commission undoubtedly had proven themselves by demonstrating integrity, professionalism and teamwork .We all know that the electoral process crossed through rough road and unforeseen challenges but in the end became successful now. It is also worth mentioning the application of the sophisticated voting procedures and the software equipment that had never been used before Somaliland.The equipment as reported is capable to prevent double voting and other forms of irregularities that frequently cause mistrust among the competing parties.
I have to also express my word of gratitude for the inspire group, the moderators and the media in general who organized the presidential debate for the first time in the history of horn of Africa. That new media development was blessing because it allowed and to certain extent gave opportunity for all viewers to evaluate the intellectual aptitude, comprehension and capacity to absorb and respond to the questions asked to all candidates. During this program, I would imagine that many people had formed their opinion about the candidate they saw him fit to settle in the highest state office , Although I am that much optimistic but I will not exclude that there were many pre-determined viewers who had previously formed about their preference .

What Somaliland is benefiting from this costly democratic process?
Certainly, we had constitutionally agreed and endorsed multi party system as political vehicle to elect our leaders from city council, parliament and the head of state. The democratic system chosen was intended to ensure wide political participation and respect citizen’s right to elect his/her favorite candidate and to be elected. It was also a transition process shifting from clan nomination to political party affiliation in order elect the candidates interested and capable to hold public offices . However , in my opinion that noble system was diluted by the clan affinity in our social organization which is powerful and effective tool that supersedes the party affiliation . I am not arguing that the transition was an error but I am arguing that the political chemistry emerged from clan vis a via village , district , and the region is not well studied in order to form well balanced political equation at least to achieve sensible political leaders and credible civil servants for the public offices . I believe if the surrounding socio-political issues were studied long time ago and if distinguished Somaliland social scientists were given a chance to come up analysis pertaining on this issue that step could have led to eliminate uneducated political champions out of the field.

My Perspective to the way forward .

From my own perspective I see all the energy and effort we exerted in nation building through democratic process and to protect the territory , regional stability and sovereignty of Somaliland is unfortunately not paying off fully the price it deserves in the eyes of the international community. It seems that international community representatives manifest double standard attitude when it comes to the collaboration about major political issues. In one hand, they hammered us badly and sometimes threatened to cut their aid if elections do not happen in time regardless to circumstantial occurrences, which we ourselves do not like it to happen. On the other hand when the course of elections are over one wonders what happened to the promises made by distinguished diplomats concerning humanitarian support , drought recovery , economic development and diplomatic relations .

Question of Somaliland existence and hopes for diplomatic recognition.

Somaliland by virtue of its political strategy fulfilled all the essential criteria of statehood in view of the international laws (refer to Montevideo convention in URGUAY 1933), self determination principle and relevant international law instruments mostly in line with the status of the Somaliland statehood which is clearly defined in the UN and AU charter. Despite all these notable efforts and activities we are shackled by the Security Council prejudicial resolutions 814/897 .In 1993 President Mohamed Ibrahim Egal of Somaliland Republic protested the issue on press release and memorandum he sent to the security council bout that UN resolution stating “ the Somali people are responsible to solve their political differences among themselves” . He said that resolution did not apply to Republic of Somaliland. “He quoted from the preamble of that resolution “Bearing in mind respect for the sovereignty and territorial integrity of Somalia”. He wrote back and clarified that resolution is biased and therefore not in favor for Somaliland stance.”

Meanwhile we understand the contents of those resolution have lost their validity, purpose and meaning because SOMALIA had plunged into deeper political crises from that period onwards . And eventually it became imminent that they cannot solve their differences unilaterally so the security council had to reverse their decisions and approve successive chapter 7 mandates by requesting peacekeeping forces to be deployed from IGAD regional countries . By then AMSOM force was created composing of the IGAD regional forces in collaborations with UN SOM , UNPOS, UNSOS to rebuild and maintain sovereignty and territorial integrity of Somalia. Unfortunately, that costly ongoing project remains futile because Al shabab is still killing civilians and are in control over major regions and districts of Somalia.

After successive terror attacks occurred in Mogadishu that took the lives of innocent citizens ; president Mohamed Abdullahi farmajo boldly spoke publically about the security situation and confessed the inability of the federal government troops as well as the AMSON to defend the security of the country. The statement underscores that Al-shabab are spiritually and morally superior to the Somali army and predicts clear acceptance of defeat. That official statement from president Farmajo also delegitimizes his presidential powers to exercise control over the Somali territory and nullifies the capability of AMSOM mandate .Furthermore, the statement discredits the validity of the security council briefing reports regarding the political developments in Somalia delivered by the SRSG (special representative to the secretary General) to the members of the security council.

My conclusion boils down to three important points. Firstly Somaliland presidential voters to think out of the box and decide to elect strong , decisive and envisioned patriotic leader to help us reach to where we belong within the international arena.
Secondly we need to initiate powerful lobby within the gigantic P-5 members of the security council that unfortunately lost sight to understand and distinguish the different political reality between Somaliland and Somalia . We need to adopt ways and means to diffuse the confusing reports presented to them. Surprisingly enough, I fail to understand why some big powers defy the UN principles that they themselves laid and uphold to it. For instance the fundamental principles like people’s right to self determination, Rule of law , Good governance , Multi-party system , Fair and free elections and Democracy. I think we should remind them gently that those are the universal principles that Somaliland fully complies and adheres to it.

Thirdly we remain vigilant about the antagonist elements trying to diminish our existence. The people of Somaliland will stand firm and united and will relentlessly continue their diplomatic struggle no matter how long it takes until we succeed to attract the attention of the progressive and sympathetic member states in the security council and therefore collaborate with them to win our diplomatic recognition.